So, after my visit to the physio (Helen Esplen, who it turns out is also physio to the GB Rowing team), I went out for a long run last Wednesday to test the knee – just over nine miles around Leith Hill. 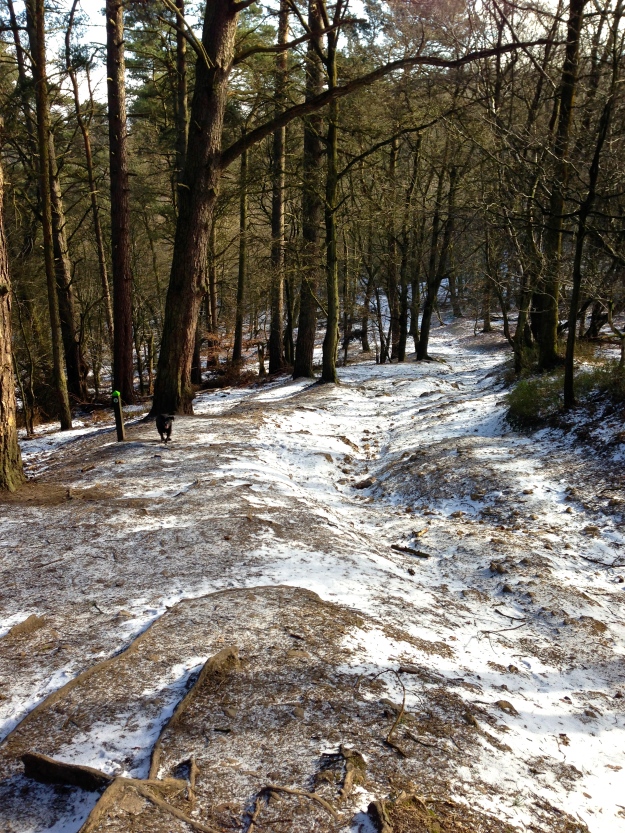 Starting out on the remains of the snow

Thanks to poor planning (okay, no planning), I found myself running downhill for most of the first half. And when your car is parked at the top of the hill, that can only mean one thing. 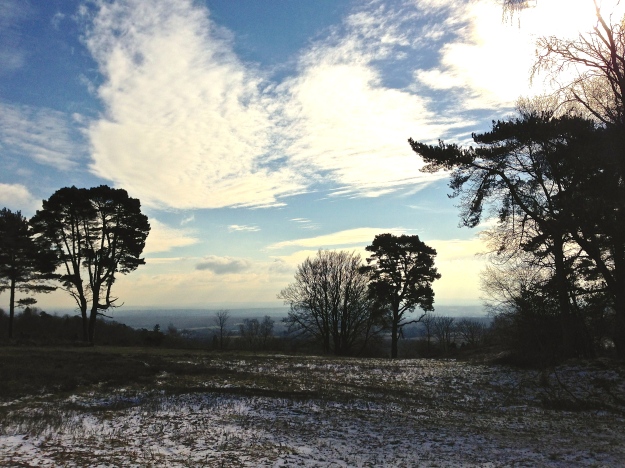 So the second half, and especially about the final third, was hard going, as I climbed steadily (sort of) towards Leith Hill Tower – only the highest point in the county, people.

The scramble up to the tower is short, but fairly merciless: a steep ‘path’ that’s in fact just a deep and thoroughly uneven rut carved by rainwater and snowmelt, tangled with roots and strewn with rocks.

By the time I got to the tower I felt ready to drop, but remembered my personal trainer, Karen, telling me how much better it is to keep going than to stop. And with the tower being the highest point around, at least it would now be all downhill to the car.

I recovered quickly, which I seem (thankfully) to be able to do, and made reasonably quick time heading back to the car park. But the most important thing was that, by the time I got there, my hitherto dodgy knee felt pretty good. Tired, as you’d expect, but not horribly stiff and sore like before.

A couple of days later, I went back to the physio for our next planned appointment, and she seemed pleasantly surprised by the improvement. I’d been diligently doing the stretches she recommended, so they’re obviously playing off.

Bouyed by this, I decided on another run at the weekend. I thought I’d try to build it up a bit: 10 miles. But then, as it does, family life got in the way and by the time I got my trainers on it was almost 5pm on Sunday evening.

As it turned out, though, I felt seriously tired. The measly 6km (3.7 miles) I did around Norbury Park felt sluggish and rotten.

Not sure what’s wrong with me at the moment, I feel like going to sleep pretty much all the time. May just be recovering from the bug that put me in bed for two days about a week ago. As it was, I was in bed before 9.30pm on Sunday night, feeling utterly shattered, so I was clearly under par.

I didn’t get any photos from this run, by the way, but I did record the fact that by the end, I was billowing steam like a racehorse:

Physio Helen reckons I need to complete a 15-18 mile run by (or at) Easter weekend, and I’m sure she’s right. So that’s the plan. I feel confident that with the knee improving, I just need to get my energy levels back up (more careful diet and maybe energy gels should help) and I can manage that distance. Not that it’ll be easy. But it’s essential if I’m going to be prepared for April 21…

My brilliant personal trainer, Karen Marshall, invited me out this Saturday morning for a long run. I’ve been having knee trouble, so we were both a bit nervous about the impact. But as Karen said, I need to get used to these distances. 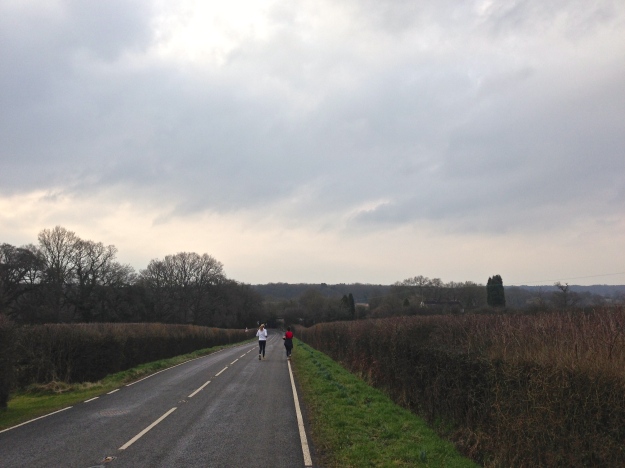 Just can’t catch the women. Story of my life.

As it was, it went pretty well. Karen, mutual friend Wendy (not wife Wendy, those who know me) and I did just over nine miles (14.9km), running from the picture-postcard village of Brockham through the Surrey countryside and back to Brockham again. (In the snow, I might add.)

Well, I did have that big bowl of porridge…

I did it in an hour and 38 minutes, and felt pretty good – apart from the knees. Right at the end they started stiffening up a lot, with pains emerging in the muscles at the back of the knee. That seems to be my Achilles heel, if you will.

Karen knows a good physio, whom I hope to see soon. Really need to get these knees sorted out. The problem is partly due, I’m sure, to the fact I recently discovered (again, via Karen) that I have terribly flat feet, which means I’ve been over-pronating for my entire walking life (so over 40 years, I’m afraid). Now that I’m addressing that, my legs are being made to work very differently. And they’re complaining.

But I shan’t. (Well, not too much.) I was pleased with my fitness on this run. We did a couple of decent-ish hills, and a good stretch of time and distance, and I felt that – knees aside – I could have carried on for quite some way.

Maybe even 26 miles. Who knows?